Only managed a second-place finish when my aces up on 4th were outdrawn by a lower two pair hand headsup. Fun times! I lost the chiplead that this hand provided me and couldn't recover: 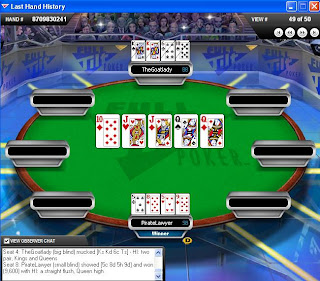 Self-explanatory, and a fun distraction as I am in the homestretch with 10 days left until I write my Bar exams.
Posted by Shrike at 10:56 AM No comments:

It's hard to get paid off on a hand like this.

I found other ways to bust Waffles and preserve my lead on the Skillz game leaderboard with a second-place finish to BamBam (we were even in chips and I have a lot of work to do, so we just arranged to chop).
Posted by Shrike at 9:34 PM 3 comments:

I had the opportunity to put in four bets on 7th street with this hand but chose to simply call a 3-bet by my opponent who'd been the bettor throughout. His final board read [7d 8s 7s] [5s] so I had some worries about flushes and full houses beating me for high.

Was I too timid with a very good two-way hand here headsup? 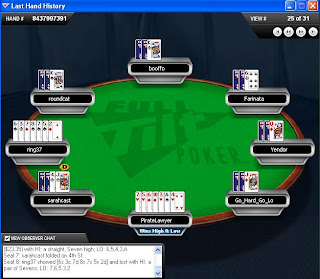 Answer: of course I was, I had a board lock for the low and should always put in four bets!

I don't even want to guess those odds, given I could've filled up at any time to lockdown the hand. 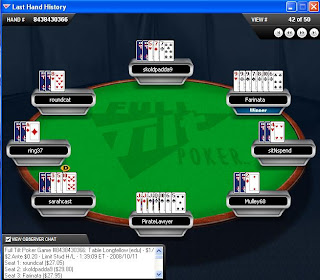 Please don't forget to sign up for this fine event being put on by a pillar of the blogger community! 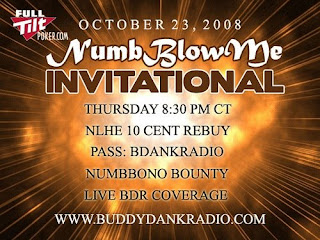 Here are a few hands of interest from the blogger cash game that Waffles set up Thursday night. 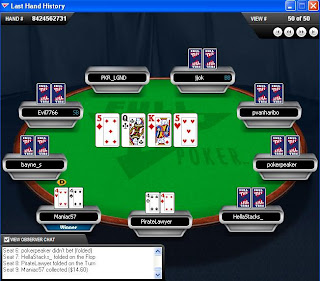 Waffles outplays me when we're holding the same hand. Boo! 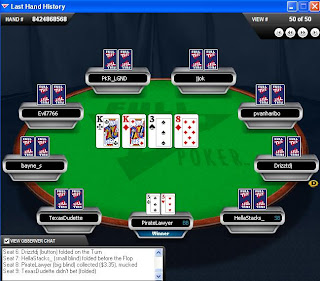 I fail to get paid here. Sniff. 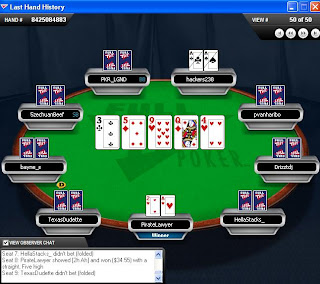 I cracked aces for the third time at this table here (the other two times I turned trips and called a shove and got it all in preflop with QQ and rivered a set). The above hand was particularly satisfying as I minraised the flop, got my weak opponent to check the turn -- at which point I happily took the free card and hit the gin card on the river -- which led to him betting out on the river and stacking off when I put him to the test.

Tonight I put in a very profitable L08 session at the cash tables. I single-tabled and managed a +50BB session against the fish despite one very poorly played hand where I needlessly donated ten bets when it was clear I was second-best in both directions.
Posted by Shrike at 8:34 PM No comments:

I blame the usual suspects for this.

You are the Hanged Man

With the Hanged man there is often a sense of fatalism, waiting for something to happen. Or a fear of
loss from a situation, rather than gain.

The Hanged Man is perhaps the most fascinating card in the deck. It reflects the story of Odin who offered himself as a sacrifice in order to gain knowledge. Hanging from the world tree, wounded by a spear, given no bread or mead, he hung for nine days. On the last day, he saw on the ground runes that had fallen from the tree, understood their meaning, and, coming down, scooped them up for his own. All knowledge is to be found in these runes.

The Hanged Man, in similar fashion, is a card about suspension, not life or death. It signifies selflessness, sacrifice and prophecy. You make yourself vulnerable and in doing so, gain illumination. You see the world differently, with almost mystical insights.

What Tarot Card are You?
Take the Test to Find Out. 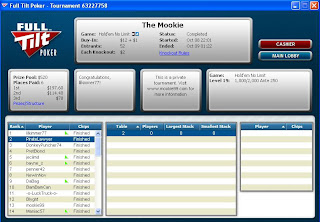 Pretty self-explanatory. I overplayed a pair headsup (I turned my hand into a bluff when the board came running aces on the turn and river as I could plausibly represent a lucky full house) vs. a flopped straight headsup and relinquished the chiplead. Then I was short-stacked and missed a freeroll to double up back up to a 3:2 disadvantage; we chopped. Then I got it in preflop with Ax in a 60/40 and villain turned a gutshot to bust me. I can't really fault villain for gambling with Kx with a 5:1 chip advantage, but it's not necessarily the spot I'd choose in his shoes with only 1 bet invested against my shove of 20 bets.

Fun times were had despite the disappointing finish, I think I only saw about 11% of flops all tournament, which is much tighter than I usually play. Of course, I was severely short-stacked in the early stages of the tournament, coming back from 200 chips with a quadruple up to become vaguely relevant, and patiently waited to double up back to a useably-sized stack. From there I kept my tight image and used it to pull off some big bluffs later on when I went card-dead. If I had won just one of five or six 60:40 weighted flips in my favour when we got down to the final five, I most likely would have had an insurmountable chiplead. Oh well. Sometimes you get unlucky.
Posted by Shrike at 10:23 PM 2 comments:

Played some low stakes limit poker this afternoon whilst taking breaks from studying. I managed to grind out some decent profits mostly playing O8 and Stud H/L. Along the way I had a couple of remarkable hands . . . 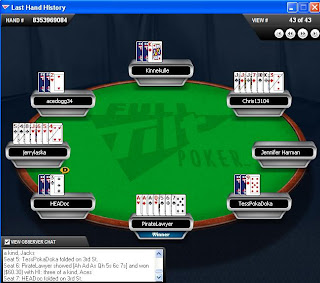 Your standard rolled up aces. I got paid off in full by two players and was even able to raise a couple of times along the way on later streets. I believe one poor villain had trip jacks on 4th and that got him in deep trouble. 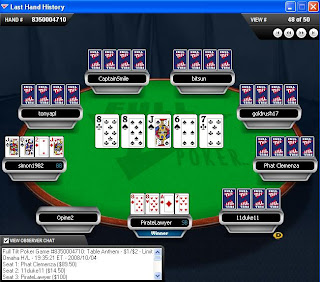 I fastplayed your standard flopped quads and fortunately for me my victim had floppped the second nuts. I led right into him and that set off some fireworks, to say the least. 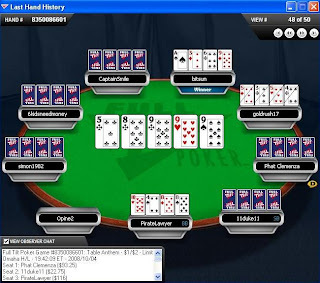 I flopped huge but my esteemed opponent stuck around with a lot of questionable values and went runner-runner perfect ... obviously I made the sick crying call on the end after ramming and jamming on the flop and turn ...

Oh well, time to crack open the law books again. I'll be very glad when the Bar exams are done!
Posted by Shrike at 10:40 PM No comments: