Canucks vs. Hawks, Game One

There's nothing like playoff hockey. Nothing. It is by far the most entertaining team sport when the intensity reaches a fever pitch and every game is a war. Basketball, football, baseball ... they all pale in comparison. And when my hometown Vancouver Canucks are marching along with a real chance at the Stanley Cup, which also just happens to be the most beautiful trophy of any major sports league in the world, you can be sure I live and die with my team.

I've got a blogger bet going on this series with lightning, a long-suffering Chicago Blackhawks fan, which only adds to the fun as the two teams meet in the second round of the NHL playoffs. So, as per usual, I got together with my dad for our playoff hockey routine of screaming at the TV screen as our Canucks were full value for a 3-0 lead after two periods over a young Hawks team that showed its lack of experience and was dominated, in large part due to their own undisciplined play which had them in the penalty box for long stretches. If you make mistakes like that, the Sedins et al. will make you pay.

However, I got more than a little nervous as the Hawks turned the tables in the third period to storm back to a 3-3 tie and it was looking as if the Canucks would improbably be stuck going into overtime in a game they had no business losing. But with under two minutes to go the Hawks comitted a costly turnover at the Canucks blueline and gave up a 4-1 outnumbered rush and Sami Salo made no mistake on the rebound to snap home the game-winner. An empty net goal quickly followed and the home team won 5-3.

Lightning has to hope that the talented young captain of the Hawks, Jonathan Toews, gets healthy and is able to perform up to his usual standard of play. He was noticeably invisible, except for taking a double minor penalty for high-sticking in the first period, and only played four shifts in the third period. The Hawks as a team are really going to have to improve their competitiveness over a full 60 minutes as the Canucks are only going to play better as they shake off the rust from a long nine-day layoff. I would bet a lot of money that the Canucks won't blow another three-goal lead in this series.
Posted by Shrike at 9:56 PM 2 comments: 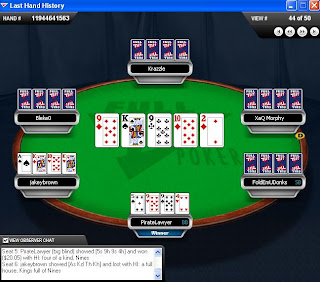 Sometimes Omaha sets you up and there is nothing you can do about it. CK is a fan of nines; this is a data point in her favour.
Posted by Shrike at 10:29 PM 4 comments:

I got out and about last night and got to see some friends and we ended up playing a 6-handed NLHE freezeout. Was a lot of fun since I have had no opportunities to play live poker since December's trip to Las Vegas. Early on with 60BB effective stacks, I found myself in an interesting spot in the big blind with the suited jackace in diamonds in the big blind. The short-stacked player on my left (who had lost the early big pot to the player in the small blind with top pair versus a rivered straight) raised to 3x the blinds and the small blind called. I called.

The flop came down 7d2d4s. It was checked around to the raiser, who bet 12 BBs and was clearly committed to playing for his stack with only about 18 BBs behind. The small blind called. The pot was large and I read the small blind as weak with any two cards, and the other villain with an overpair to the board, probably nines or tens. So I opted to check-raise for my stack hoping to get a loose call from the small blind, expecting to have more than 33% pot equity, and if I forced her out I'd have approximately 15 outs twice with some dead money in the pot going headsup against the shorty. Sure enough, she snap-called and we all flipped our hands over.

The small blind had 8d4d for a pair and a baby flush draw.
The big blind had 9s9d for the overpair to the board.
I had the AdJd for the nut flush draw and two overcards.

Sadly, I bricked out and 99 held for the main pot and I transferred the remainder of my chips to the small blind.

I was not all that happy with how I played the hand, though. I could have re-raised preflop. On the flop, I made a risky play and even though I had the best of it with a nice overlay to make my hand I put my stack at risk.

This was just another data point in the ongoing struggle to balance risk management and expected value in the early stages of a poker tournament. For comparison's sake, if I was playing an online poker tournament, I probably play this more aggressively preflop and I'd have much more hope that jackace would end up being the mortal nuts.
Posted by Shrike at 1:00 PM 1 comment:

A proverb best sums up my thoughts

It's always darkest before the dawn.

The last two weeks have been traumatic, but I like where I've arrived. I just received some very welcome good news, and I hope this is just the beginning of something great.
Posted by Shrike at 3:04 PM 4 comments:

The last half of this Sheryl Crow song sums up my state of mind. (Ironically as real life is hammering me into the ground, poker is actually treating me well. I'd gladly go busto again online if it would help fix other problems in some kharmic way.)

Wouldn't it be good if
we could hop a flight to anywhere
So long to this life
So much for pretending
Bad luck's never-ending
It's never ending!


Maybe the Canucks can win the Stanley Cup. That would be a nice distraction and something I could celebrate.
Posted by Shrike at 5:54 PM 2 comments:

More proof that presto is gold

It's not gold merely for this mostly silent blogger. 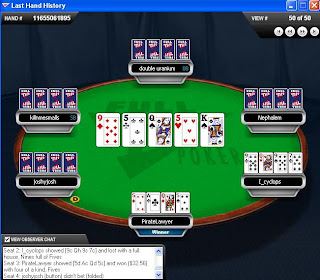 I wasn't in love with this hand on the flop, so I opted to call the half-pot lead in position since my opponent was able to bet here with high wraps (KJTx, JT8x, etc), aces, as well as middle set of nines (I could discount top set since I was holding a queen) and I wanted to re-evaluate on the turn and potentially run a bluff if he checked to me. Needless to say all the money went in on the turn as my opponent led out again and wasn't able to get away from middle set, to my great glee and profit.
Posted by Shrike at 8:45 PM 1 comment:

Sadly, the 5 of clubs didn't appear on 7th street to let me scoop this pot. An unworthy rival showed up with it. Sniff. Half of the pot was pretty profitable, though. I was happy to fill up at the end as a consolation for missing my steel wheel. 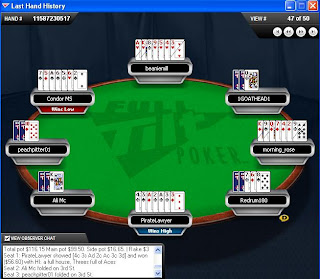 I couldn't resist Goat's offer to burn off some bankroll (especially after a 10 buyin downswing at the cash game tables).

Instead, my love of deepstack cash games -- oh wait, this is a tournament? -- led me to some fun times.

1) I was unable to fold flopped top two pair vs. Bayne. Spiked a four-outer vs. bottom set of fours for an early suckout & resulting double. I played this one very badly. As soon as Bayne 4-bet shoved the T64 two spade flop I tried to figure out if he could have anything but bottom set. I made a mental shrug and made a bad call praying he had an overpair. Instead I get rewarded for my bad decision with some good luck from the RNG.

2) I cracked another blogger's aces and they coldn't get away postflop.

I open for 2.5 bbs in EP, I get re-raised to 8 bbs. Effective stacks are nearly 100 bbs deep. I flop trips, pocket aces decide to check-raise the turn ... one pair is no good. No doubt many will just scratch their heads at this one and call me unflattering names. My short answer is: I have position, implied odds with deep stacks and a pretty good idea of what my opponent has. Investing 5 more bbs is easy enough to do there when I have my opponent safely covered and I'll know where I stand postflop.

At various points all the way down to three-handed once the cash bubble bursts I have half the chips in play. This lets me play big-stack poker and I run like sucko.

3) I crack Jo's aces with queens (all-in preflop). Must resist feeling guilty because she has a BBT4 ToC seat and I don't.

4) My aces hold up vs. sevens that flop a open-ended straight draw. I dodge ten outs twice.

5) We get down to headsup and I am slightly ahead of Buddy in chips after he felts Hoy. He flops a straight vs. my flush + gutter and I don't get there. I grind back for a while and then run a 4bet bluff with the suited hammer vs. TT and go home in 2nd place.

Fun times. The three-handed play was pretty darn fun and I enjoyed it. I wish I didn't spew so badly once Buddy knocked Hoy out since the HU portion of the tournament was much shorter than it could have been, and I thought I had a good handle on how to grind out a win.
Posted by Shrike at 10:45 PM 4 comments: