Had a blast as a late registrant in the PLO deepstack event, was big chip leader for most of the tourney as my AAxx hands kept holding up vs. KKxx hands for stacks right there on the flop as I played them fast throughout the tourney and somehow got tons of action with them (some where my opponents were drawing to two outs, some where they were drawing for more). However, as we got down to 6 players I slowly crumbled and ended up as the bubble boy as I watched Bayne mount a furious comeback. I knew I was going to regret doubling him up earlier at the final table as he slowly but surely chipped up big-time and we ended up playing for a huge pot with four players left when I flopped a nut straight with a redraw to Broadway, but his set + flush draw got there on the river. I probably should have played it more slowly on the flop and jammed the turn (which was a brick) but we likely get it all in there no matter what. Maybe I could have dumped it when the river came ugly, who knows ... surviving that hand from a big picture tourney payout perspective is very important but in a small bloggament I was in no mood to fold there.

I had a lot of fun and racked up lots of scalps, which gave me the fun distraction from studying that I needed.
Posted by Shrike at 8:21 PM 1 comment:

Enough said, really.
Posted by Shrike at 2:55 PM No comments:

Not your usual second-best hand 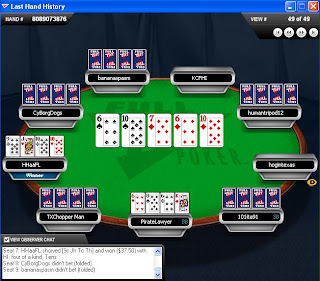 I guess I need to take a lesson from Bayne, who knows how to quit for a while.
Posted by Shrike at 7:49 PM No comments:

Ah, the joys of stuyding for exams.

Question: Is making up a conveyance checklist any fun?

On a good note I am pleased to say. I added a Dookie title to my bloggament collection. 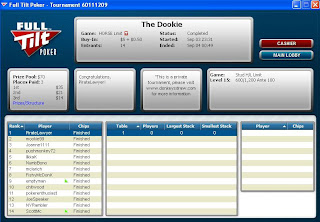 In what will likely be my last bloggament for a couple of months, I managed to place 3rd in the Skillz game. Many interesting hands were played: I lost a couple of huge key pots late, the one below stands out; 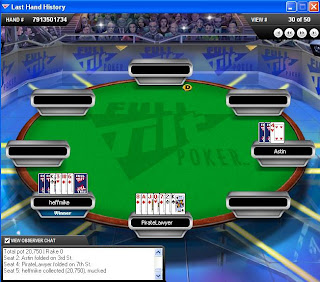 but did manage a couple of notable scoops earlier in the tournament. They more or less speak for themselves. 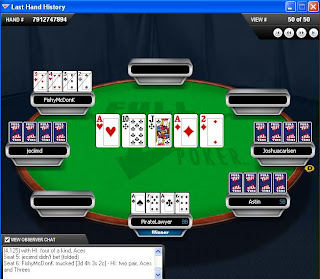 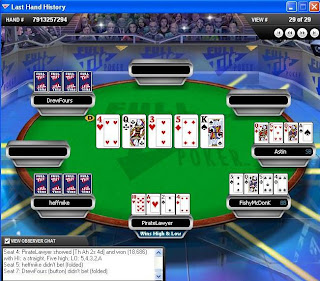 And the standard wheel with nut flush redraw freeroll on the turn.
Posted by Shrike at 9:18 PM 2 comments:

Labour Day weekend. The calm before the storm.

I knew I would be resting up this weekend prior to beginning my Bar course. Time to catch up on chores, prepare a planned routine for the next few grueling weeks, and to wrap up one last task for my principal to hand over late tomorrow after the orientation session at the Law Society. And fit in some family time before my sister and her husband head off on their two-week vacation to Scotland later this week.

So ... in betweeen sorting through some of those aforementioned chores I fired up a 2/4 LHE table on FTP, and chatted with emptyman, who is on a real heater when it comes to HORSE tourneys to say the least.

I didn't equal his tourney winnings -- he was in the process of winning yet another HORSE MTT this afternoon, but it felt good to rack up a killer 153-hand session where I booked a big win [+150BBs], with a stellar 87% win at showdown.

I had forgotten just how soft low-limit LHE can be. As long as you can run just average, you can book a solid profit. I happened to run fairly hot after a slow start, and I got paid off in spades.

This was a fun note to end upon as I'll be playing very little poker during the next two months.
Posted by Shrike at 3:41 PM No comments: