Staring at the Abyss, part one

You know you're headed to Vegas when ... your seat-mate on the airplane is a 25 year-old male clutching a passpart, airline ticket, wallet, and a roll of $3000 US wrapped in an elastic band in his hands during the flight. (I discovered this degen's name was Brock and that he was a Tsawassen bartender who had won a seat into the Bellagio Five-Diamond tournament.)

Those who know me well will tell you that I am uneasy and introverted in a crowd of strangers.

The five-act play that was the winter blogger gathering never elicited that introverted defensive shell from me, for which I am profoundly grateful. Everyone I met, without exception, had a smile on their face and was happy to strike up a conversation. That made the trip worthwhile all by itself.

CK and F-Train (the guides): two of the warmest people you'll ever meet, they played the role of hosts to perfection and I gladly fell into their orbit for much of my stay. From The Great Pinball Expedition to a great late-night sushi dinner on Saturday after the blogger tourney where we all started at the same table to blogger mixed games to blogger 1/2 NL games to the IP mixed games ... well, that's a lot of good memories packed into four days!

Al (the roommate): I cannot forget the sight of meeting him for the first time at McCarran. He looked like death warmed over, but that didn't stop him from greeting me like a long-lost friend and telling funny stories the whole weekend. He even laughed at my scooter joke about the sorely-missed Riggstad!

Joanada, Astin, Kat (the fellow Canadians): compatriots who offered warm hugs & handshakes, talk of home, and knew their hockey and the Blue Jays. They were also much much better at slots and video poker than I was!

VinNay (the honorary Canadian): also knew his hockey, especially his Sabres. We both took a bath during the blogger mixed game on Friday night at the MGM and I had to laugh as he gallantly wore a Patriots jersey on Sunday and watched his Bills throw away a football game with admirable stoicism.

OhCaptain and OhCountess (the Minnesotans who could do no wrong): two of the nicest people you could ever meet, we had many pleasant conversations. Tim was one of the two official chroniclers of the Great Pinball Expedition (MetsFan was the other); he also managed to place 5th in the blogger tourney. Not to be outdone, his better half quickly outstripped that modest feat with huge video poker exploits of her own.

KuroKitty, Recess Rampage, Gnome (the serious poker players): we all trekked over to the Venetian together on Thursday night as proof of our determination to try to find and exploit +EV situations. I owe Recess $1.

Dr. Pauly, Derek, High on Poker (New Yorkers): good guys who happily would listen to me talk or take my money in the mixed blogger game. I waved a deli sandwich in front of Pauly's face late Sunday but he didn't rise to the bait since it wasn't pastrami.

Grubby and Grubbette (good-looking Asians): nice people to talk to at the bar and fierce competitors at my starting table at the big Saturday blogger tourney. The hammer was thrown down at least once, and I inadvertently caused Grubby's demise at the hands of Derek -- I should know better than to play AQ from early position!

Doc Chako, The Wife, Joshua Carlson, Zeem (southern neighbours): really nice group of Seattle-area bloggers. The latter two bought me many drinks and said nice things about me, which expanded my hat size; the Doc spiced up the Sunday cash game at the IP and knows his whisky; the Wife was the prettiest thing around and modelled Vikings gear at the poker table to my great amusement as she tried not to injure herself. A Pacific Northwest mini-gathering should definitely be in the works!

Smokkee, Dawn Summers, Bacon Mary et al. (Sunday cash game participants): tough foes at the IP cash game, all of them, who slung chips and dished out the beats and took them with a smile.

Bayne (the craps maestro): his mojo didn't appear to be working this trip, so it's just as well I didn't join him for a dice session after all. His intake of Stella Artois (my beer of choice) vastly exceeded mine. I was humbled.

Emptyman and MiamiDon (the invisible ones): the former holed up at the Strat most of the time and failed to make a planned lunch on departure day. I think this was a plot to foil any opportunity for me to flirt with his better half (Jesse clearly married up) ... so I will have to plot my revenge! Don ... he ran behind schedule on Thursday so we didn't see much of each other except for at the blogger tournament. Next time I want to make the golf happen!

Well, that's quite the cast of characters, and I know I've missed mentioning quite a number of new friends. In part two I'll try to rectify that with some more talk about the Great Pinball Expedition, and some actual poker content.
Posted by Shrike at 12:40 PM 2 comments:

Trip report will be up tomorrow, I trust. I gotta catch up on sleep.

Edit: Managed to wake up in time to win a Skillz game. 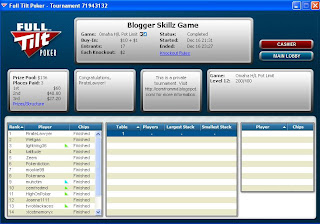 My flight leaves in less than 24 hours. I can hardly wait.

Pinball is looking more and more popular as a planned activity; it looks like we'll end up trekking over in the early afternoon on Friday. I must remember to take some photos to satisfy my father's jealousy. ;)

The over/under on how much time I spend at the museum? Three hours.
Posted by Shrike at 3:21 PM 2 comments: 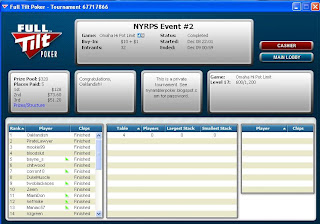 Clawed back from big deficit headsup but got outdrawn/setup to eventually finish second for my troubles. I think I should get bonus points for knocking out both Bayne and Waffles ...

Things are looking up for my forthcoming Vegas trip. Now if only this success translates to the big bloggament at the Venetian on Saturday.
Posted by Shrike at 10:02 PM No comments:

After being setup or badly outdrawn in the Mookie, I started to shake my poker blues with a dominant Dookie win. By the time we got down to the final table I had more than half the chips in play and was never in any real danger of losing my lead at any point. If only I was a card rack in higher stakes games I'd be truly set! 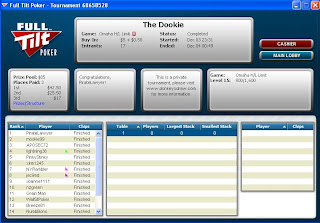